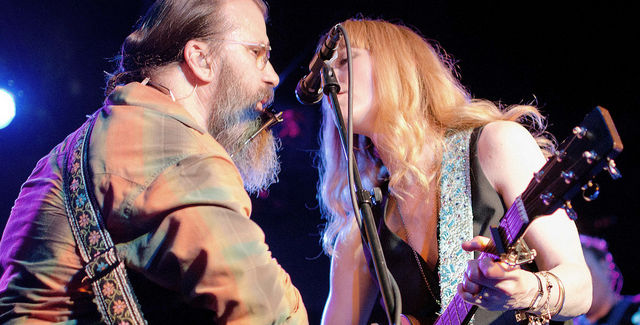 For what was essentially a “one man and his guitar” show, Steve Earle surely kicked up a storm in a comfortably-full Wellington Opera House last night.

Walk-in music from a Lyttleton band (who’s name I didn’t catch) provided an appropriate warm-up, right down to the leader’s stomps and hollers clearly cribbed from Earle’s own performances. Nice idea, having some live music while the crowd settles.

The diminutive redheaded chanteuse Allison Moorer – Earle’s seventh (!) wife and little sister of the wonderful Shelby Lynne – arrived unannounced on stage with her equally diminutive Martin guitar and launched straight in to “Mockingbird”, from her current album of the same name. The posessor of a large set of pipes for such a small woman, Moorer’s somewhat strident delivery can be a bit overpowering, but she certainly extracts maximum emotion from her material – part her own and part others’. I’ve long been an admirer of Moorer’s, fanned partly by the fact that she’s the gorgeous Shelby’s sibling and partly by the fascinatingly morbid childhood event which influences a lot of her work (their father shot dead their mother and them himself as they watched). Finishing with a nicely pitched cover of Sam Cooke’s “A Change is Gonna Come” (am I allowed to say ‘yay Obama?’, Moorer asked), her 40 minute set served as a perfect appetiser for the main event.

Since “Guitar Town” in 1986, Steve Earle has produced around a dozen studio albums including the seminal “Copperhead Road” in 1988, as well as countless compilations, contributions and live sets. He has also written and directed a play, published a book of stories, gone to jail, taken far too many drugs, and played a million excruciatingly loud shows with his band The Dukes. He is known as a political activist who doesn’t know when to just ‘shut up and play’, a wordsmith who’s mouth gets him into trouble more often than it’s used for performing his deceptively simple songs. It was always going to be interesting to see how he could carry a solo acoustic show, especially with his latest album “Washington Square Serenade” being easily the most electronically experimental of his career.

Arriving on stage and kicking straight off with “Tennessee Blues” – the opener from “Washington Square Serenade”, about moving from Nashville to New York, it was clear that the lack of electricity wasn’t going to slow Earle down at all. The big shiny Martin threw out a veritable orchestra of notes, and that distinctive voice growled into the mic – and often away from it. Add in a harmonica sound as big as a brass section, his trademark vocal whoops, and regular stamping of big cowboy boots on the wooden stage, and Steve Earle, one man band, was immediately owning the room.

Not known for a gigantic sense of humour, the big man was caught off guard just a little after belting out the third in an uninterrupted opening sequence of four songs. In the brief silence that followed applause for his classic “The Devil’s Right Hand”, a patron up the back casually called “good song, mate!”. Earle was unable to conceal a big smile, and the exchange set the scene for an evening of good-spirited banter interspersed with, well, plenty of good songs.

We got the lot, actually. For an impeccably-paced two hour set the “hard core troubadour” treated us to the full range of his incredible song-writing, switching instruments, using his pedals to great effect, and delivering song after song with the ease of a performer who’s been treading the boards for decades. Songs from “Washington Square Serenade” were augmented by a DJ-type performer who provided booming beats and some subtle vocals, and wife Moorer joined him for a couple of (pretty ordinary) duets and some backing vocals. In amongst the songs, the inevitable political sermons were delivered – capital punishment, gun laws, immigration, civil rights – but with elections both here and in the U.S. having just been decided, Earle’s comments were both relevant and heartfelt. A bit of a fan of New Zealand – as a keen fly-fisherman, this is his angling nirvana – Earle has clearly been following recent events here and he urged us to “read the fine print” of the new government’s policies. The obligatory folky singalong went down pretty well -“you’re not getting out of this fucker without doing some singing yourselves!” – and in a flash a hundred-odd minutes had passed, the standard whistling and stamping induced the standard three-song ‘encore’, and it was time to shut the show down.  But not without a parting shot.

“Don’t forget to read the fine print”, Earle intoned. “You guys have got one of the best little countries in the world. For god’s sake, don’t fuck it up”. A few more bows, a couple of fist pumps, an ear-to-ear grin and the big man was gone.