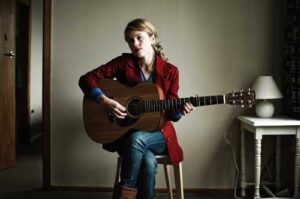 It was perfect. Just how I wanted it to be. Music was very definitely in the house last night.

Judging by the enthusiasm with which the concept was received a couple of months ago; the enthusiasm with which Jess Chambers‘ performance was received last night; and the enthusiastic emails I’ve received today, the old-fashioned ‘salon recital’ could be making a comeback. I said it was an experiment (although someone did point out that I also called it the ‘inaugural’ Ahiaruhe house concert) and I can confidently say that the experiment was a success. There was some luck on my side though.

I was lucky that Jess was keen to entertain my left-of-centre suggestion in the first place. I’d have understood if she hadn’t been – it’s a bit of a hike over the hill and back, the audience number is limited by the size of the room, and it could be an intimidating setting for someone used to bigger spaces. I got around the first issue by offering to put her and her partner Peter up for the night and feeding them good farm produce and their favourite beer; I solved the second by charging a little more for entry than I was originally intending; and avoided the third by not sending her any pictures of the room before she got here.

The weather was also likely to give me grief  – this house can be very noisy if it’s raining heavily or blowing hard, and getting in the front door can be a mission in a northerly. But we got lucky with that too – it was a beautiful, dead calm autumn evening and the room was as quiet as a church. And warm, thankfully, as this house can be mightily cold in a southerly snap.

Lucky also to have a supply of great friends and acquaintances who jumped at the chance to attend, some coming from as far away as Wellington and Pukerua Bay as well as from around the Wairarapa. As much as I’ve claimed that I set it up because I wanted to hear Jess in such a setting, providing music for people has always been a bit of a pastime of mine, albeit previously in the form of cassetted recording tape or plastic disks of data (sshh, don’t tell). So sitting in that room last night with 40-odd familiar people who were showing that they were thoroughly enjoying the show – including a wife who hadn’t sat down all day until then – I felt like the luckiest guy in the world.

The performance was magical. The intimate setting suited Jess’ understated presence perfectly. Peter Hill was the ideal accompanist on guitars and mandolin. The audience was wonderfully attentive and hung on every note, and were generous with their applause. And Jess was funny and engaging and sang her beautifully-crafted songs with passion and precision. It seemed all over far too quickly.

So, any thoughts about who to get for the next one?